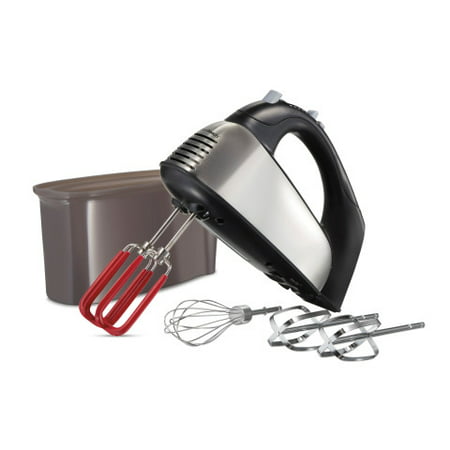 The Hamilton Beach® SoftScrape™ 6 Speed Hand Mixer with Snap-On Case has exclusive SoftScrape™ beaters that are taller and designed to mix faster and easier with less clogging. These specially-designed beaters won't scratch bowls or nonstick pots so mash your potatoes right in the cooking pot without dirtying another bowl. The hand mixer comes with 2 SoftScrape beaters, a whisk and 2 traditional beaters. The 5 attachments are dishwasher safe and store neatly in the included snap-on storage case to reduce the chance beaters are lost or misplaced. This versatile hand mixer has 6 speed options for a wide range of mixing tasks, plus QuickBurst™ for an extra burst of power. The hand mixer has 300 watts of peak mixing power to get the job done whether you're making a batch of homemade cookies, preparing mashed potatoes, or whipping cream to top a homemade pie. With this hand mixer, you'll easily mix and whip ingredients for your favorite recipes. The Bowl Rest™ feature conveniently stabilizes the mixer on the edge of the bowl when not in use to free your hands, and the mixer has a nonskid heel that reduces tipping. From America's #1 hand mixer brand.* 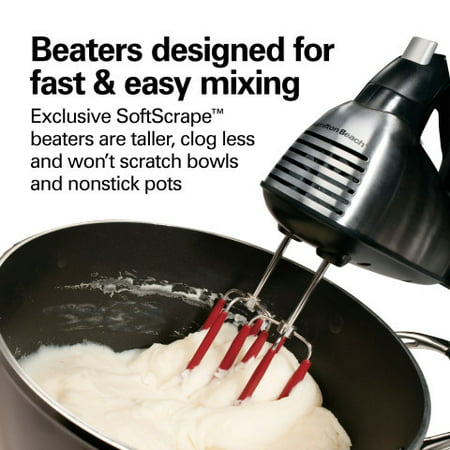 BEATERS DESIGNED FOR FAST AND EASY MIXING. Exclusive Soft
Scrape™ beaters on this high-performance Hamilton Beach hand mixer are taller and designed to mix faster and clog less. Soft
Scrape™ beaters also will not scratch bowls and nonstick pots. NO MORE LOST BEATERS: The snap-on storage case holds the included attachments, reducing the chance that beaters for the electric hand mixer get lost or misplaced. A convenient access door makes it easy to add attachments or remove them from the case. VERSATILE WITH 6 SPEEDS AND QUICKBURST™ BUTTON. This versatile hand mixer with storage case has 6 different speed options for a wide range of mixing tasks, plus Quick
Burst™ at any speed level for those times when you need an extra burst of power. INCLUDES COMPLETE 5 PIECE ATTACHMENT SET: The mixer includes everything you need to start mixing. It comes with 2 Soft
Scrape beaters, a whisk and 2 traditional beaters. The attachments are dishwasher safe and store neatly in the snap-on storage case. MIX AND WHIP INGREDIENTS WITH EASE: With 300 watts peak power, the hand mixer easily mixes and whips the ingredients for your favorite recipes, whether you're adding heavy ingredients like nuts to cookie dough or making light, fluffy meringue for a pie.Customer Reviews

Very happy with this mixer
I really like this mixer. It is much quieter than my old mixer and my stand mixer. The whisk whipped up the whipping cream very quickly. I haven't used the regular beaters yet, opting to use the silicone covered ones. The potatoes flew out of the pan on the first try. It's better to mash them a little first, then use the mixer for the finishing touch. They turned out nicely whipped. I don't really like how the cord sticks out of the container a bit before it stores in it. I think it will be alright though.Jenn

Great strength for a hand mixer.
I bought this same mixer one year ago which I really liked for the speed and strength which is good for occasionally mashing potatoes. One month ago I plugged it in to use for cake batter and it sounded like the gears fell apart. I'm hoping this mixer will not repeat itself next year.Diana

I would reccomend it to others
What few times I have used it since I got it, I really like it. easy to use. did a fantastic job on what I used it for.